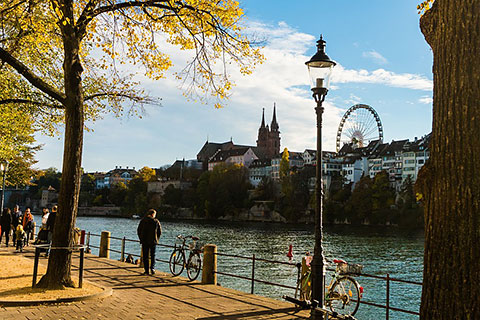 Basel is a city in northwestern Switzerland on the river Rhine. Basel is Switzerland's third-most-populous city (after Zürich and Geneva) with about 180,000 inhabitants.

Located where the Swiss, French and German borders meet, Basel also has suburbs in France and Germany. As of 2016, the Swiss Basel agglomeration was the third largest in Switzerland with a population of 541,000 in 74 municipalities in Switzerland (municipal count as of 2018). The initiative Trinational Eurodistrict Basel (TEB) of 62 suburban communes including municipalities in neighboring countries, counted 829'000 inhabitants in 2007.

The official language of Basel is (the Swiss variety of Standard) German, but the main spoken language is the local Basel German dialect.

The city is known for its many internationally renowned museums, ranging from the Kunstmuseum, the first collection of art accessible to the public in Europe (1661) and the largest museum of art in the whole of Switzerland, to the Fondation Beyeler (located in Riehen). The University of Basel, Switzerland's oldest university (founded in 1460), and the city's centuries-long commitment to humanism, have made Basel a safe haven at times of political unrest in other parts of Europe for the likes of Erasmus of Rotterdam, the Holbein family, and more recently also Hermann Hesse and Karl Jaspers.